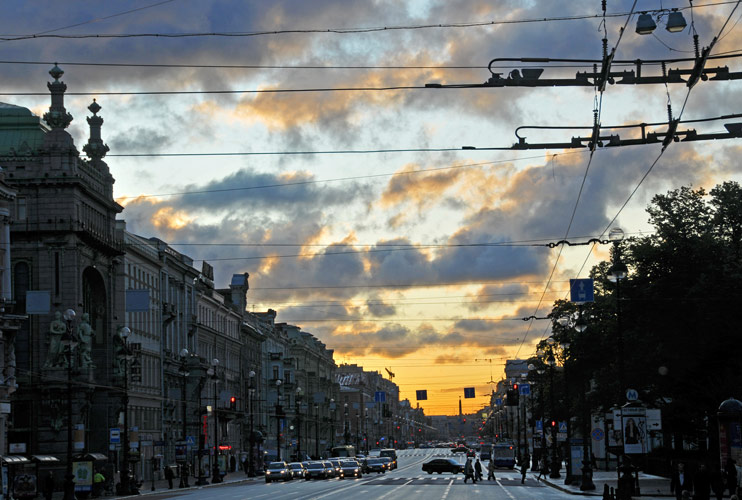 Nevsky Prospect. The Story of the Name

Everyone knows and wishes on a city tour in St. Petersburg to walk or at least see from a car window gorgeous Nevsky prospect – the main street of St. Petersburg. Some people call it avenue which is exactly right, but you are going to Russia, aren’t you? And here is a chance to learn new on your visit to St. Petersburg!

Prospect is a common word in Russian language used for a broad and long street. Though the origin is Latin in this case: tsar Peter the Great liked to use foreign words. So, the word “prospect” comes from “perspective”, “prospective” and shortened to “prospect”!

It envisages Peter’s talent of being ahead of his time, creating new perspectives for his country.

Special place in Peter’s understanding was given to European St. Petersburg, which was created to be a prosperous city with many perspectives in future and stunning architecture and perspective roads!

Why Nevsky and what it points out? Peter the Great’s very first important avenue was called Big Perspective road, which was at first changed into Nevsky perspective road and then became Nevsky prospect!

So, the founder of St.Petersburg came up with the most suitable name for the main street from the 3d attempt! But what a choice!

The road cut through the forest connected the two most important St. Petersburg landmarks: the naval headquarters and shipbuilding yard called the Admiralty and – St. Alexander Nevsky Lavra. “Lavra” indicates monastery of the highest rank in our country and there are only three of that kind in all Russia at the moment.

So, thus, on one hand, tsar navigator showed his passion to sea and pointed out the most important industrial sight: crowned with a model of a ship, the shiny golden steeple of the Admiralty was conceived to become the centre of St. Petersburg, the highlight of its architectural plan and one of the most important landmarks. That’s on one hand.

And on the other, Peter the Great was a religious man and pointed out to Lavra.

Learn more about a religious magnet, a magnificent cathedral in the heart of the city calledSt. Isaac's Cathedral

Why this Lavra is so special?

Peter the Great brought the holy relics of the novgorodian prince Alexander of the Neva (Nevsky) to his beloved St. Petersburg, future capital of Russian empire. This event was of high importance and happened in 1724. And now there comes the long-awaited  explanation why “Nevsky” prospect? 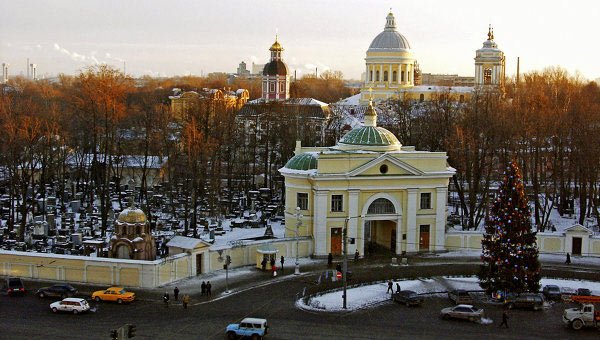 As on, not after the Neva river! But in honour of the glorious prince, who was later canonized.

Novgorodian prince Alexander protected our territories in the North-West of Russia. In 1240 there happened a battle against the Swedes who tried to conquer this area numerous times. This battle occurred on the Neva river banks but outside nowadays St. Petersburg. It was customary in the past to give a nickname to a prince after his great victory. Thus, prince Alexander was nicknamed “Nevsky” (of the Neva).

It turned out so, that this very prince was a predecessor of Peter the Great himself. And once the city from where Alexander Nevsky came – Novgorod the Great -  was the centre of North-West and the first capital of the state of Rus. It used to control the territories where St. Petersburg stands today. So our city is its successor, and Peter the Great understood that completely.

And finally, why Nevsky?

So, there is not only religious, but stately significance of having such a monastery: this is authentic Russian territory with the deep roots and glorious men of the past. And young St. Petersburg  took over the relay baton in the North West from previously powerful Novgorod the Great like Peter the Great did from Alexander Nevsky.

Worth mentioning, that we, petersburgers, are lucky to be protected by two saints – the name-saint of Peter the Great and of our city - St. Apostle Peter and Peter the Great’s ancestor on this territory - equal-to-apostles holy prince St. Alexander Nevsky!

One more interesting fact for your attention, please. They really like to rename things in Russia and for a while Nevsky prospect was called the prospect of 25th of October. How to do without that? The Great October Socialist revolution of 1917 had to be commemorated everywhere and, of course, in St. Petersburg-Leningrad. Even if you go to a tiny little village with muddy streets here in Russia you can easily come across the proud name 25th of October prospect adorning the side of a dilapidating wooden house. But, thanks God, they renamed the main avenue of St. Petersburg back into Nevsky prospect quite soon!

To sum it up

This name is unique and significant: it possess a wish of Peter the Great to our city for being prospective, connects the two important landmarks and reminds about a very important event from rich Russian history – Battle on the Neva and Peter’s predecessor who was lucky to become a saint!

Nevsky prospect welcomes you on a private guided tour in St. Petersburg – the same way like our open-minded and friendly city does.

Let’s discover the beauty and fascinating stories of Northern Venice on our St. Petersburg city tour with Highlights visits!