There is hardly a place in whole Russia where you can feel as much spirituality, admiration and grandeur as in the Assumption Cathedral of the Kremlin (also known as Dormition Cathedral Moscow).

“Overwhelming” – that is the way people describe their feelings after visiting the Kremlin main temple for the first time. A place of coronations, important royal weddings and the burial place of the Heads of the Russian Church – Assumption Cathedral Moscow – is a must on any itinerary. On a guided Kremlin tour with us, you will immerse into the world of the Russian Royalty and Christianity and the time will be spent in fascinating stories and exciting discoveries. As anything enjoyable, it will go fast!

The history coming through the mists of time… 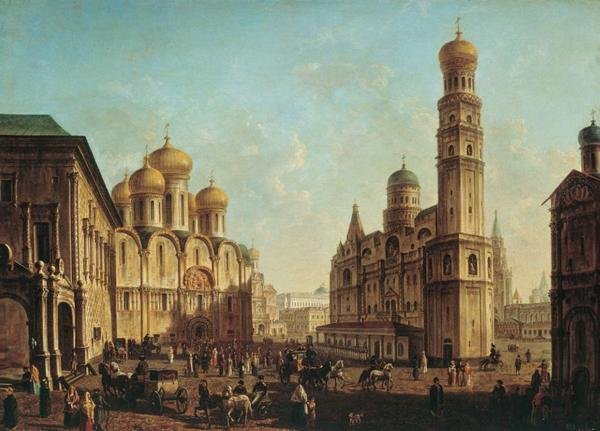 Like many great edifices, the Assumption Cathedral had several predecessors. Its history started in 1326, to be exact, when the first church of the same name was built on the Kremlin grounds.

It was the time when the Russian metropolitan Peter moved his residence to the Kremlin. He required a beautiful stone church in his residence and vigorously took up the construction.

That church had stood for about 150 years, until there came time for replacement… A nearly finished new church suffered a setback, while the second attempt to resurrect the cathedral proved successful. It took 5 years to build the church. 1479 became the year of completion of the Assumption Cathedral we are enjoying today.

There is much more to tell about the history of the Cathedral, which, frankly speaking, requires a separate article. Now let’s find out what so exciting is waiting for you inside!

Behind the Kremlin territory walls there is a plenty of other sights to explore. Learn about them at:Moscow Kremlin – What to See Inside 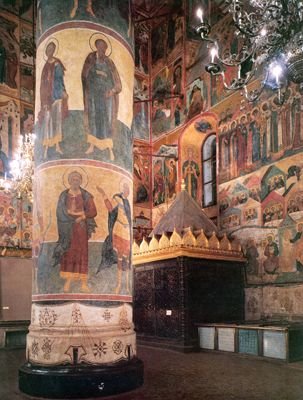 Looking at the austere and majestic exterior of the Cathedral of the Assumption of the Virgin Mary, one can hardly imagine how much different it looks inside! Many times, leading tours of the Kremlin, we see the same looks of excitement and admiration of travellers from all parts of the world. The 17th-century frescoes accomplished by the most talented Old-Russian painters all over the Cathedral wall (including the ceiling) cannot leave anyone indifferent.

Inside the domes of the Church you can see different images of God. The upper parts of the walls contain illustrations of the Gospel. In the two lower levels of the Southern and Northern walls one can “read”, like a book, an illustrative story of Mary and Jesus’s lives. The story is interrupted on the Western side, which depicts the monumental composition of “The Judgment Day”. Take a moment to look at it in more detail. The story of this important day that the Christian World is waiting for will come to life on the wall of Russia’s main Church.

For everyone entering the most important Kremlin church though its Western portal there comes a view of an impressive Iconostasis (icon-stand). It separates the altar from the main part of the church. This five-tiered icon-wall is nearly 16 (!) meters tall and comprises about 70 icons (holy images painted on wood). The truly grandiose ensemble was created in just 9 months by the most talented artists of the time – there were about 20 of them.

The frame of the iconostasis is executed in gilded silver, which impresses with its size and adds to a sense of grandeur and solemnity of this House of God.

The works of those talented artists can also be found in another gem behind the Kremlin walls:Kremlin Armoury Museum

Praying Seats of the Royalty 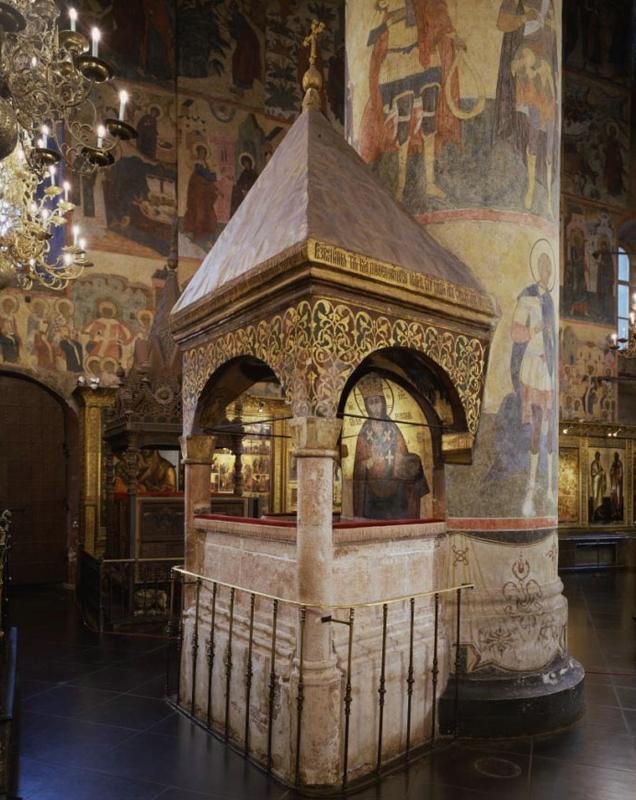 Seat for a Patriarch

As a main sanctuary for the members of the Royal family, it also had seats for praying for Tsar and Tsarina. Today we can admire a wooden structure next to the Southern wall of the Assumption Cathedral, which was carved for Ivan the Terrible (a Russian ruler of the 16th century).

An elegant structure attached to one of the Northern columns is a praying seat for tsarinas. It is adorned with three gilded holy images of the Nativity of Christ, Holy Mary and St. John the Baptist, as if to remind of the most important role of a tsarina in a royal family.

In between the praying seats for Tsar and Tsarina is a seat for a Patriarch. It is made of stone and placed in front of the most important icon in the Church – the Icon of the Assumption of Holy Mary. 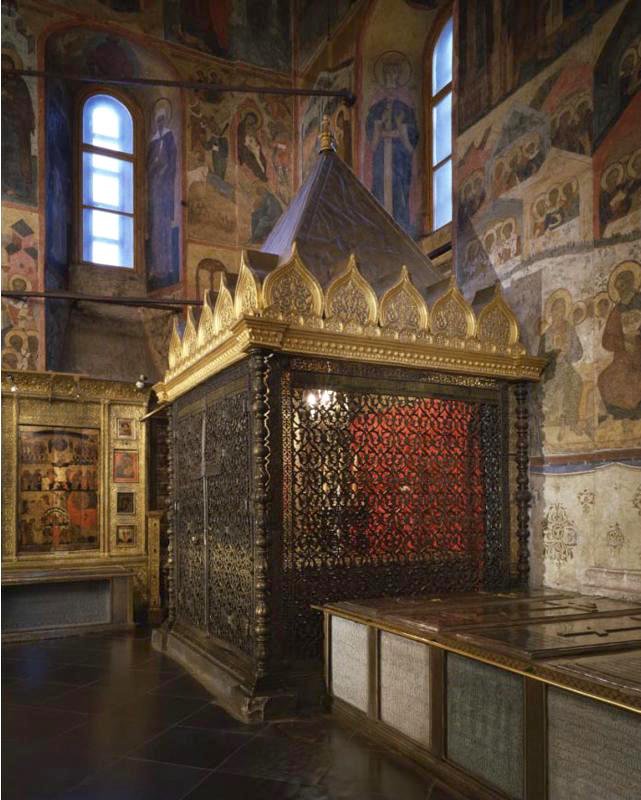 For several centuries the Assumption Cathedral Moscow served as burial place for metropolitans and patriarchs. You can see their graves along the three walls of the Church. Some most venerated Holy Hierarchs are buried in silver shrines – there are two of them in the South-Eastern and North-Western corners. As you enter the church, on your right-hand side, your eye will catch a 3rd shrine – a unique example of the Old Russian foundry technique.

The shrine, made of cast filigree grille of intertwined herbs, leaves and sprouts, protects the rest of patriarch Germogen, died as a martyr during the Polish intervention to Russia in the 17th century. Grateful Russia erected a monument to him in the Alexander Garden in 2013 for the 400 anniversary of the liberation from the Polish intervention.

The first Moscow metropolitan who initiated the construction of the first Assumption Cathedral in the early 14th century (we talked about him above, as you remember, of course) is buried behind the Icon-wall, where God dwells.

Kremlin Tour with an expert and friendly guide 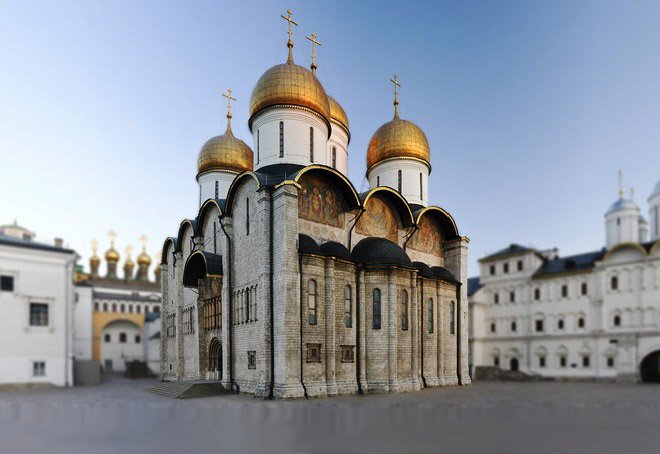 Visiting the Kremlin, walking its vast 27-hectares area and touring the Kremlin cathedrals will be a memorable and fun experience with our Moscow tour guide. We are experts in it, know its secrets and stories and are excited to share our knowledge and passion for the Kremlin with you! 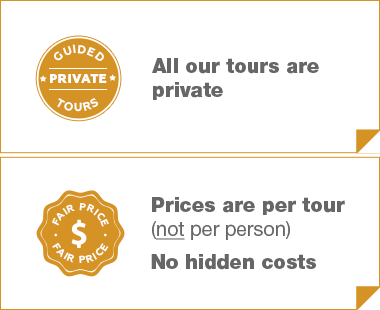 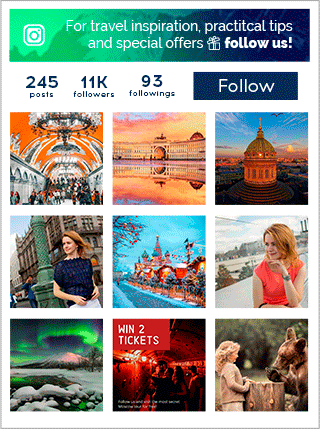