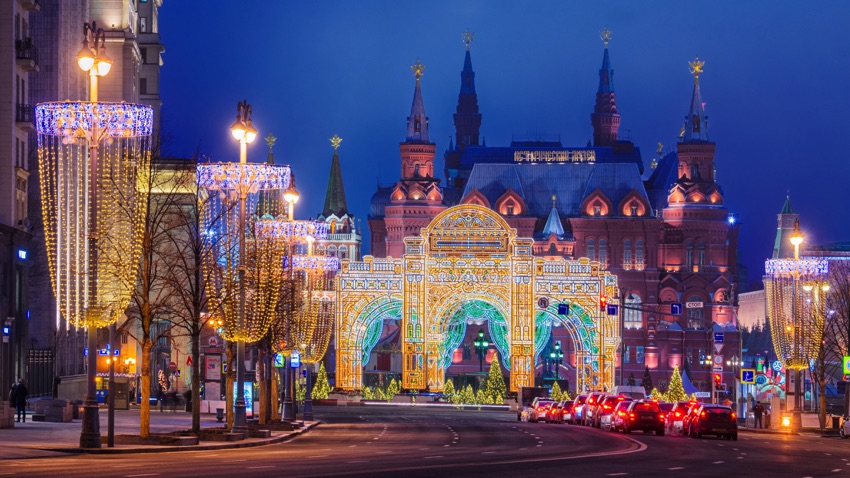 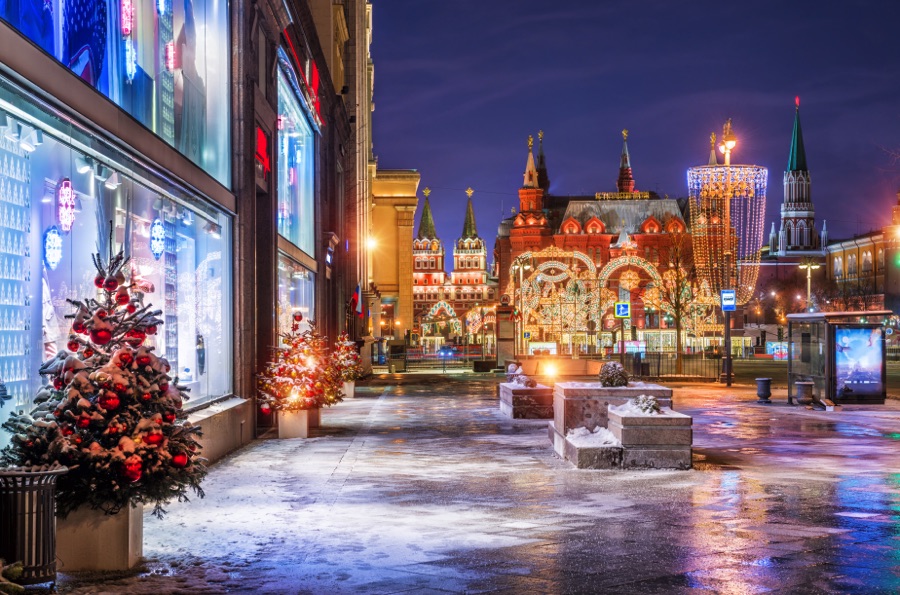 The main street of Russia – Tverskaya Street – is the center of Moscow’s life.

Here you can find the 5-star Ritz-Carlton and National, fashionable shops, numerous cafeterias and restaurants, famous Eliseev’s food store, one of the city’s main bookstores, Moscow City Hall and opposite it the monument to the founder of the city – Yury the Long Armed…

Starting at the very heart of Moscow, Manezh Square, the street stretches out for about 2 km northwest. If you continue moving in this direction you will eventually reach St. Petersburg that is about 760 km from Moscow. That's why it is called the main Russian thoroughfare.

There is much to see and do at Tverskaya Street (Tverskaya Ulitsa), and we highly recommend you to visit it during your own exploration of the city or on a private Moscow tour!

The luxury 5-star National hotel occupies one of the premier locations in the country. Russia’s main sights – Red Square and the Kremlin – are literally across the street. Operating since 1903, this hotel is executed in the best architectural traditions of the late 19th century – eclectic style with elements of Art Nouveau. More than its 30 rooms boast a picturesque views of the Kremlin, St. Basil Cathedral and Red Square.

Next door the National Hotel, is the famous Ritz-Carlton Moscow. It opened its doors in 2007 and offers panoramic views of the historic area of Moscow.

This luxury hotel provides a full range of services – from GYM and spacious SPA-center with a swimming pool to personal butler service. Over 300 of its large guest rooms and suits are furnished in marble from Altai and Portugal mountains.

The O2 Lounge, that is on the roof the Ritz, provides the best views of the Kremlin and Red Square. 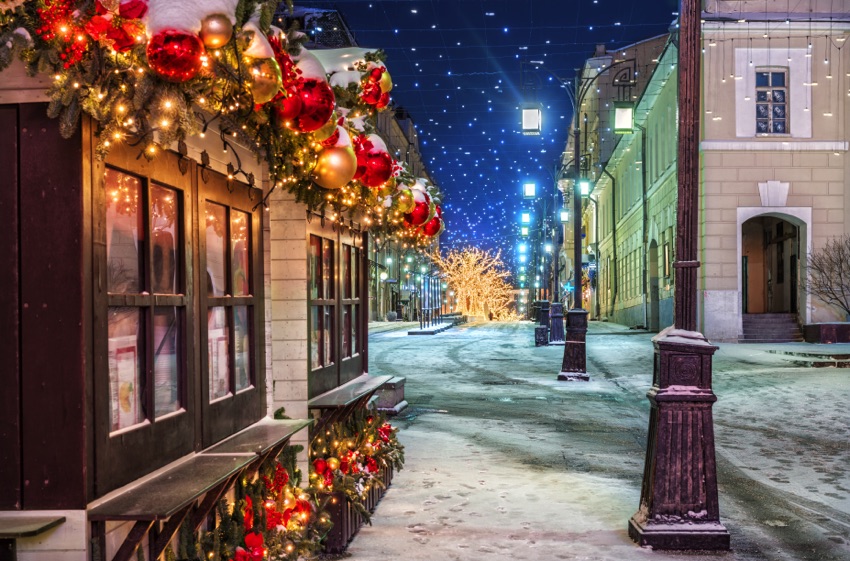 Kamergerskiy Pereulok (Kamergersky Side Lane) is one of the favorite places for locals and tourists alike.  It is a pedestrian street and full of cafes and restaurants of French, Italian, Chinese and Japanese cuisines. It also provides a choice of coffee shops including Starbucks and local Shokoladnitsa.

Where to enjoy the best coffee in Moscow?Top 8 Moscow Coffee Shops

Moscow City Hall and Monument to Yuriy the Long Armed 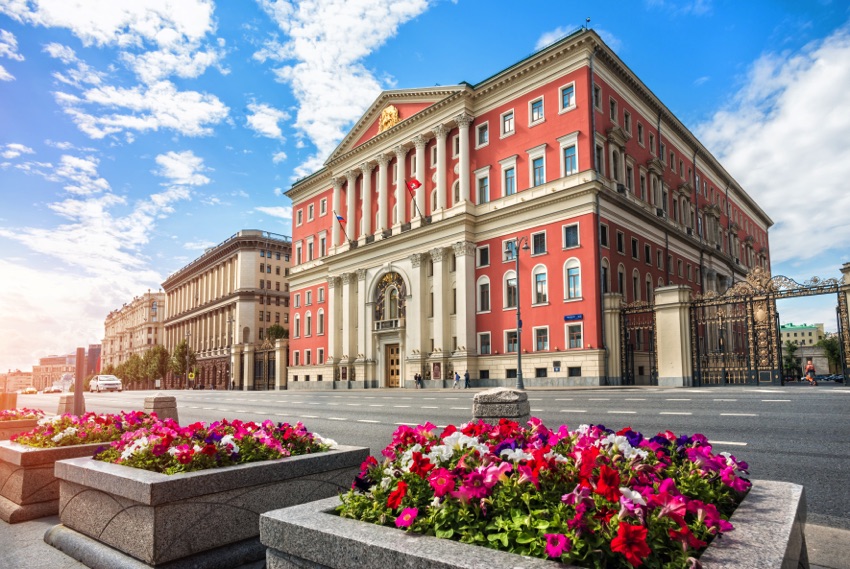 On the left side of Tverskaya, if moving from the Kremlin, stands a classical red-and-white structure the Moscow City Hall. Its central part is decorated with an 8-column portico with a pediment and the presence of two flags – State and Moscow – indicates that it is a government building. After an extensive reconstruction, finished in 2014, the building shines with newness and the Moscow Coat of Arms, decorating its top part, attracts with luster of gold.

Opposite the Moscow City Hall is a monument to the founder of the city – Yuriy the Long Armed.

A little further along Tverskaya Street and moments away from Pushkin Square is another attraction – Eliseevskiy Store (Eliseev Food Store).

Opened in 1901, it keeps traditions of quality along with its luxury neo-baroque decoration.  It occupies an 18th century building, where Pushkin and Baratynskiy were known to read their poems.

At the intersection of Tverskaya Street and Tverskoy Boulevard is a square that bears name of a great Russian poet – Alexander Pushkin. At the center of it stands the late 19th century monument to the poet. Take a moment to come closer and look at it – it is one of the rare monuments that reveal a deep thought and soul of the poet. It is by far one of the best monuments in Moscow.

What other monuments and buildings are a must-see in Moscow?Moscow Architecture – Buildings and Monuments 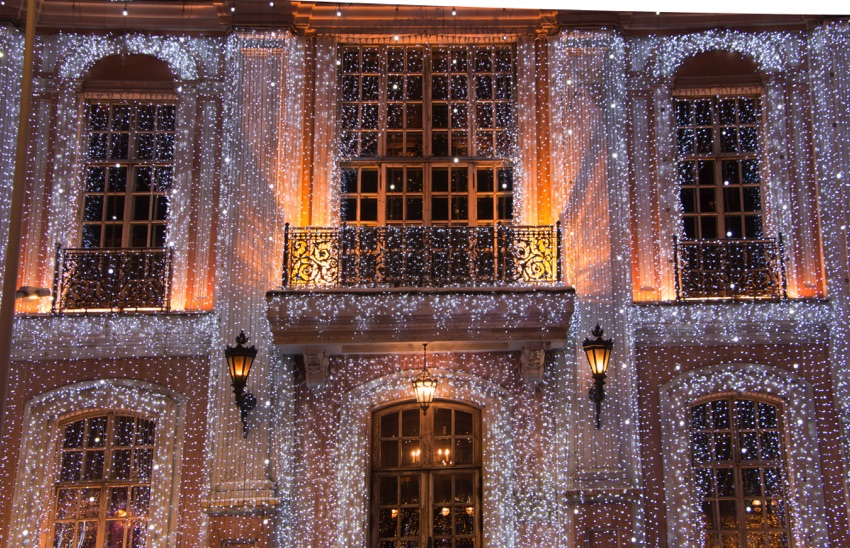 Opposite Pushkin Monument, at Tverskoy Boulevard is Pushkin Café. It opened its doors in 1999 and quickly gained fame among locals and city guests.

The reputation of the restaurant is so high, that it seems impossible to visit Moscow without lunch or dinner at Pushkin Café. It is an international place indeed, with English heard more often than Russian.

The internal space of the restaurant is arranged into several halls incl. Drugstore and Orangery on the ground floor, and Library Hall on the 2nd floor. Russian nobleman cuisine is served on the Drugstore area 24/7.

Museum of Contemporary History of Russia

Walking up Tverskaya Street and passing by Pushkin Square, your attention will be caught by a classical 18th century building, executed in red and white colors with gates decorated with lions. Museum of Contemporary History of Russia occupies this former noble mansion. The Museum traces Russian history from the end of the 19th century to the present days and is the best place to learn about the events, which led to the Russian Revolution of 1917, and life in Russia during the USSR time.

Walk along this main street of Russia while on one of our Moscow tours. Your private Moscow tourist guide will share their knowledge and love for the city and make you a great company for the day!