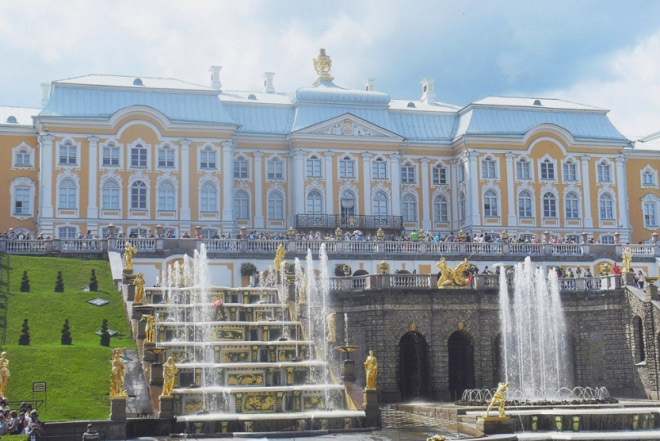 Peterhof, the UNESCO site, is one of the most attractive summer residences of the Romanovs in the vicinity of St. Petersburg. Moreover, visit there can be one of the best St. Petersburg tours, especially when it is accompanied by one of our expert guides.

It takes about an hour drive to reach Peterhof (Peter’s Yard) ensemble of palaces and parks, located in the town of Petrodvorets (Peter’s Palace in English) on the cost of the Gulf of Finland. The complex consists of the Grand palace, about 20 museums total including small palaces on the grounds of Peterhof residence, and the famous Upper Garden and Lower Park with incredible fountains, which brought the proud nickname to the place: Peterhof, Russian Versailles.

Since there are several royal palaces in St. Petersburg, all built in the 1700s, and some superior, the main attraction is not the Grand palace itself, but the Fountain park of Peterhof, which is a unique landmark of the Russian history, artistic culture and style. There are a total of 175 different fountains, and 5 water cascades. The most majestic one is called the Grand cascade with “Samson” fountain. It is a huge, wide, terraced cluster of fountains with numerous gilded and dramatic statues shooting water high up into the air. It has gained worldwide fame and has also become a symbol of the city. 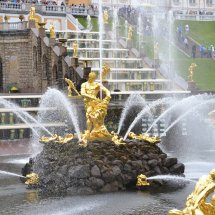 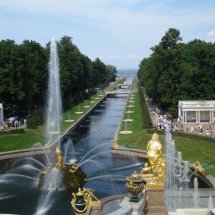 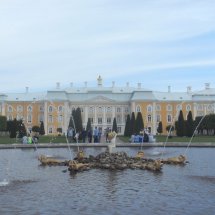 The Peterhof gardens also reveal some playful features of Peter the Great’s personality. Some of the Peterhof fountains are so called “trick fountains”, which are activated by people walking on a cobble stone path, and not knowing on which stones to step. Peter always allowed his high level guests to walk first on these narrow paths, and he himself, walking at a safe distance behind his guests, got a good laugh, while his victims received an unexpected and embarrassing shower and an idea of their host’s strange sense of humor.

Some information about another St. Petersburg museum-reserve called Tsarskoye Selo can be viewed atThe Highlights of Tsarskoe Selo

Among the small palaces, located in the Lower Park of Peterhof, the Monplaisir can be mentioned. In this small estate Peter the Great enjoyed his life. Catherine’s Block stands in the neighborhood:  from this small palace there departed young and ambitious Catherine, before she became Great: future Empress was heading to St. Petersburg to claim the throne after the coup against her husband. Also the Imperial Baths and Kitchen offer the most unique opportunity to see the opulence of the cold, warm and steam bathrooms, the royal reception and dressing rooms, as well as the adjacent pantry, kitchen, coffee room and Assembly Hall.

Peterhof tour with a private guide

The tour of Peterhof is not just a visit to the beautiful palaces and gardens of the Northern Versailles. This is the tour, which will bring you back to the 18th century and show you the summer life of Royalty, its traditions and styles. You will be the private guest of the Russian Emperor and find out all the secrets of the court. Without Peterhof you haven’t been to St. Petersburg, that’s what the locals say. Join our Peterhof tour and you will never forget your wonderful trip there!