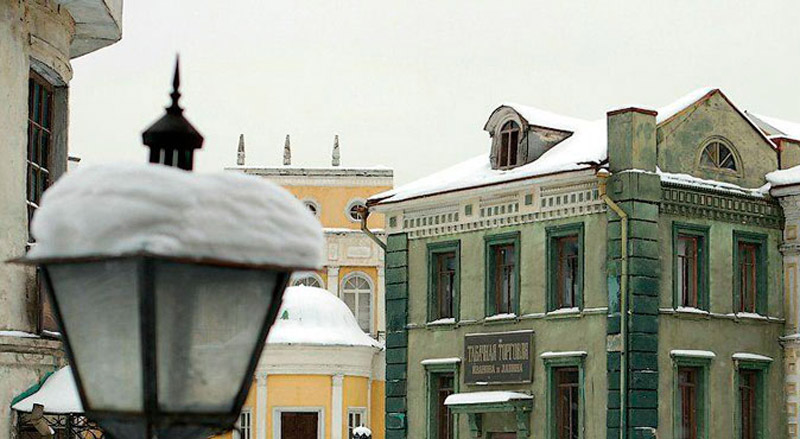 Top secret places in Moscow! Not known to many locals, for the city visitors they can provide an exciting opportunity to grasp the national culture and supplement their experience of Moscow with new impressions!

Review the secret Moscow places below and you might want to see some of them during your Custom Tour with a Moscow private guide! 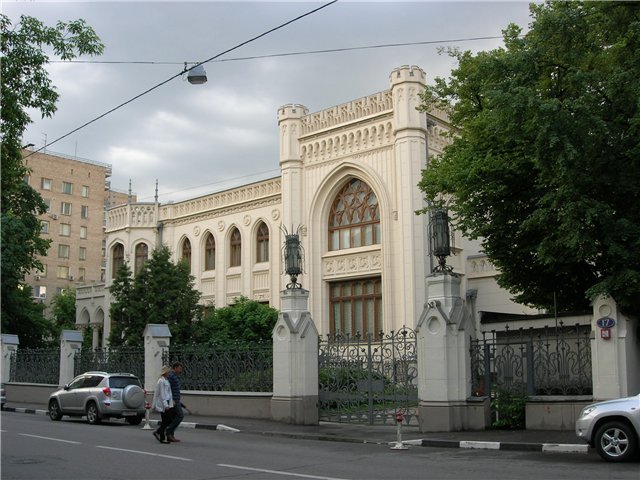 It seems the popularity of Bulgakov and his novel “The Master and Margarita” will never end. It spread out far beyond the Russian borders and limits of one generation. His masterpiece is engraved in the Moscow architecture as well. According to the novel, Margarita lived in the house (or rather - a palace!) which was constructed by architect Fyodor Schekhtel for millionaire Morozov. Today, this romantic town castle of Neo-Gothic style belongs to the Government as the Reception House of the Ministry of Foreign Affairs. One can enjoy its splendid view from the outside and take this great opportunity to feel a connection between the story and reality. 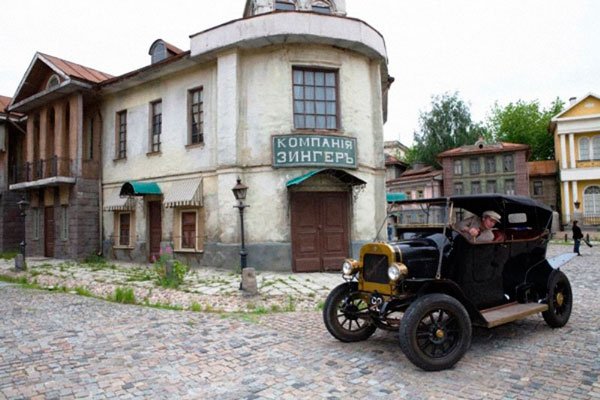 Take a trip back in time and immerse yourself into the atmosphere of the 19-century Moscow at Mosfilm Studio Museum. The outdoor decoration is like a small town built for various historical film shoots. Many popular motion pictures were shot on its grounds, including Doctor Zhivago which is known to many of our overseas guests. The atmosphere of old Moscow is everywhere here.

Address: 1, Mosfilmovskaya Str. (it is about 2 km from either Sportivnaya or Park Pobedy metro stations, so it is better take a private transport to get there).

Moscow is full of various sights with rich cultural and historical background. Some are overviewed atCultural Attractions in Moscow

Cathedral of the Immaculate Conception of the Holy Virgin 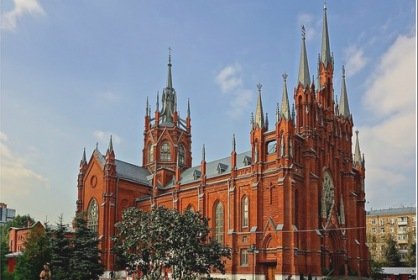 It is the largest Catholic cathedral in whole Russia and designed in the Gothic Revival style - so unusual to the Russian architecture! Services are held in Russian, Polish, Korean, English, French, Spanish and Latin. Please visit the official web site for details. 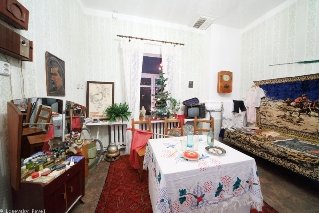 The USSR Museum – a relatively new Moscow museum – managed to quickly gain interest and love of locals and tourists. "Proletariat", "Perestroika", "The Country of the Soviets", "Made in the USSR" – these words and concepts made history and are reflected in numerous items, recordings, newspaper ads and posters exhibited in this rather small but very exciting museum. Despite the items are all authentic - you can touch everything here and get your own experience of the Country of the Soviets!

Visit to the the USSR museum can become a part of your tour of Moscow!

Information Update: the Museum is currently closed for visits.

To dive into the Soviet epoch, you might want to have a look at another notable Moscow museum:Stalin's Bunker Moscow 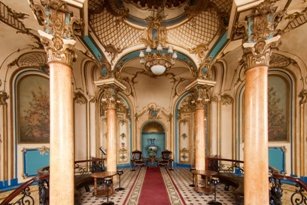 Sanduny are known to be the best steam baths in Moscow. Excellent service, accumulated over decades, historic luxuriously decorated building and its interiors (make sure to book a tour of it too!) and a local delicacy Khachapuri Adjara - how can you resist such a temptation?! 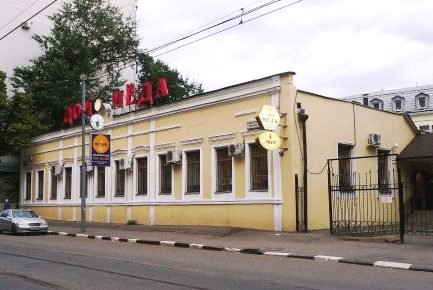 Honey House is a specialized store of honey and related products from the leading bee farms from all over Russia. Great selection and quality are guaranteed – you can taste everything! In addition to honey, you can also shop for mead and other cultural things. They also have a small cafe. 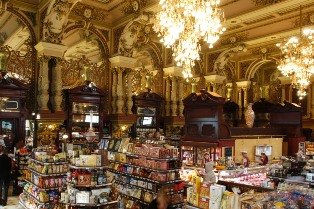 Reconstructed by merchant Grigory Eliseev, the building originally belonged to duchess Zinaida Volkonskaya whose house happily hosted the brightest representatives of Moscow intelligentsia, including poet Alexander Puskhkin and his close friends. Today like many years ago this grocery store is still more like a museum. One can shop for conventional and upscale products here and enjoy its early 20thcentury luxury interior 24/7, 365 days a year.

Address: 14, Tverskaya str. It is a few steps away from Tverskaya or Pushkinskaya metro stations. 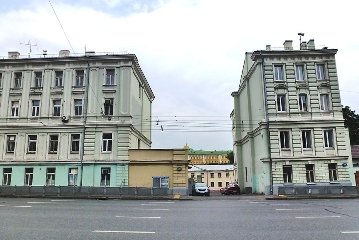 Very few people know that literally a few metres from the Kremlin and opposite the State’s Library stands “Ripped Building” – two parts of initially one structure. During the Second World War a bomb got into it, destroying its central part. Since the structure had an architectural value, it was decided to arrange it to two separate buildings. 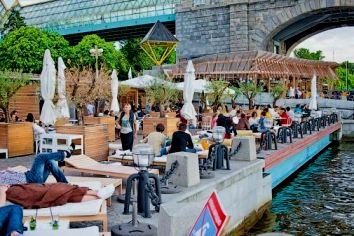 This new addition to the city has quickly won the love of many Muscovites. It is located on the grounds of the famous Gorky Park and became the symbol of its reconstruction. Wood flooring, beach beds, the sand, olive trees in pots, umbrellas, shower cabins, an outdoor bar and Wi-Fi – this idea was hard to imagine some 15 years ago!

The Oldest Building in Moscow 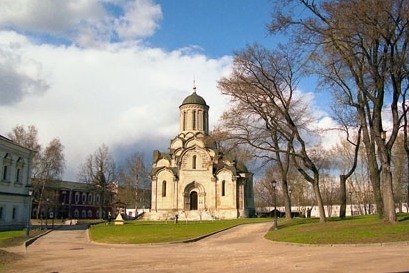 On the steep bank of Yauza river stands the oldest building in Moscow. It is the Saviour Cathedral constructed in 1425 on the grounds of the Andronnikov Monastery, founded in the middle of the 14th century. The stone Saviour Cathedrals was erected after a fire that destroyed the previous church on this holy place. Outstanding Russian icon-painters helped to create its interior, including Andrei Rublev, who - according to some sources - was buried there. The monastery itself for a long time was a traditional burial place for aristocratic elite of Moscow. 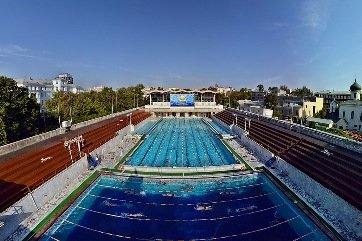 Bathing in the open air all year round is very exotic. If you do not consider yourself "walrus" – do not worry! The water will not freeze in low temperatures and swimming in the clubs of steam can bring a new and exciting experience! 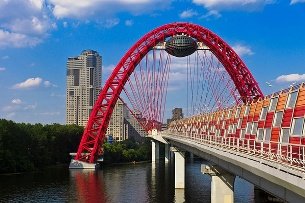 This notable and unusual structure embodied the breadth of a human thought. When looking at it, it seems one is somewhere far away from Moscow. Open to the public in 2007, the Picturesque Bridge is valued first of all for its ‘cosmic’ look, while its architectural advances are recognized by engineers. In the central top part of the Bridge (which looks like a capsule) is currently an observation point (please check if open before visit) with an idea to also open a marriage registration office there.

So, take a camera and entertain your friends with incredible photos and yourself with pleasant memories.

If you would like to visit any of these places – it may be possible to include them to your Moscow city tour!