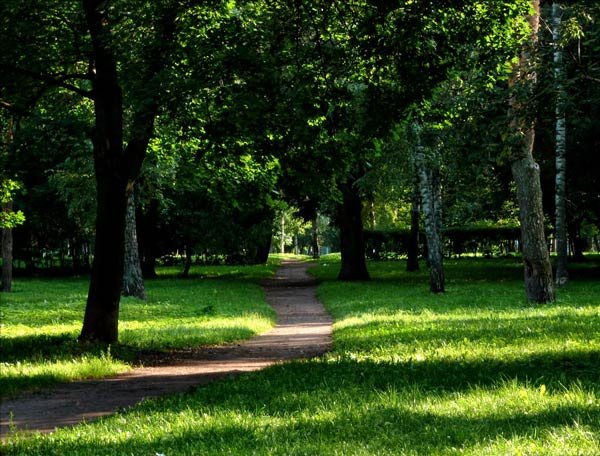 One of the parks in Moscow

Beautiful Russia is most famous for its many historical and cultural heritages, which have always connected its citizens with the old, glorious times of the country. And this is wonderful, although it would be a shame to forget about the splendid natural attractions that are an important part of this nation’s greatness.

In Moscow in particular, amazing sights and breathtaking landscapes are everywhere you look around. In the list below we included some of the city’s natural attractions – from national parks to gardens and hills – that must not be missed during the city exploration. And the best way to do it is with your Moscow Tourist guide.

A day spent in Kolomenskoye, one of Moscow's former royal estates, is a perfect way to include as much unique cultural and architectural details, as natural and wildlife areas. Situated in an ancient village that contains a little bit of history in each and every corner, the Kolomenskoye park preserves some of its most amazing natural features.

Golosov Ravine, that includes some famous sacred stones, is definitely not to be missed. The numerous apple and oak trees (including one of the oldest oaks in this city) and amazing landscapes created by Dyakovskaya, Kolomenskoye, and Zhuzha streams will offer you the pleasant feeling that you belong there.

At the bottom of Kolomenskoye rise runs the beautiful Moskva River. What a stunning view opens just behind the main manmade masterpiece of this Moscow attraction – Church of the Ascension. This tent-roof stone church of the 16th century is in the UNESCO list of World Heritage. And this is not the only structure at this Moscow royal estate. Other architectural attractions of Kolomenskoye Park include Wooden cabin of Peter the Great, Beheading of St. John the Baptist Church in Diakovo, Front Gates and in some distance (about 2 km) a wooden “wonder of the world” – the restored Palace of Tsar Alexey, commonly known as the Kolomenskoye Palace. 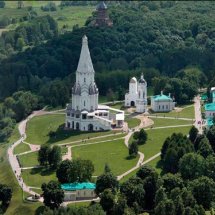 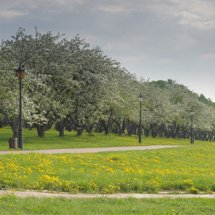 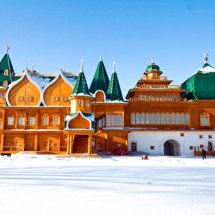 To minimize your efforts on learning how to get there on your own, we prepared an articleMoscow Public Transport – Overview & Travel Tips

Situated in the district with the same name, Sokolniki Park gained its name and popularity from Tsar Alexei Mikhailovich's falconry custom. Today, the park preserves most of the 18th century natural wild life and includes many areas created especially for recreational and amusement purposes. Surrounding the inside wilderness (cedars, oaks, larches, limes, maples, walnut, as well as tens of bird species, squirrels, hares and weasels), are the Sokolniki Sports Palace and numerous restaurants and cafés that give you the opportunity to comfortably relax after a day spent in nature. 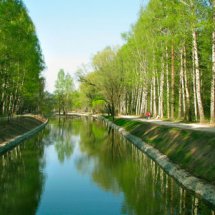 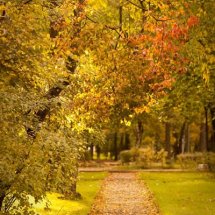 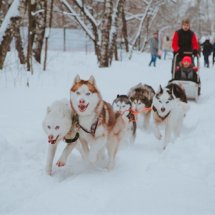 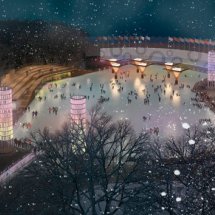 Created during the first half of the 19th century, Neskuchny Garden is the oldest park, a part of Gorky Park in Moscow. This attraction is unique for is the fact that it combines the native Russian culture (carried by the Green Theater, Count Orlov's former house, ancient arch bridges and descents) with numerous natural ponds, ravines, a poultry yard and rare species of birds and animals. Greenhouses with exotic plants and fruits are present here are well. Thus, a day spent in the Neskuchny Sad (translates as “non-boring garden”) will be a delight for all your senses and the perfect way to relax either on your own or with the dearest ones. 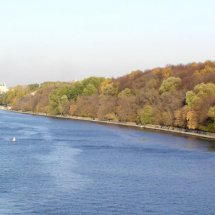 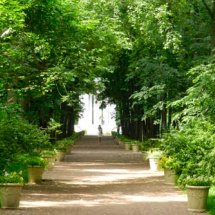 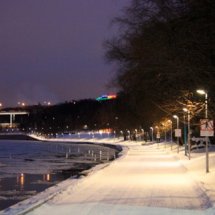 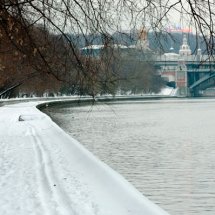 After so many places dedicated to culture, history and spirituality, it is time to include one dedicated entirely to the amusement and relaxation of the visitors. Gorky Central Park of Culture and Leisure in its full name, is a natural area opened in 1928 and makes the perfect natural attraction for any time of the year. A large variety of spaces dedicated to sport activities (ice skating, hockey, aerobics, dance and so on), an open-air cinema and many spaces created especially for children are all waiting to give you and your family one of the best days of your travel to Russia. 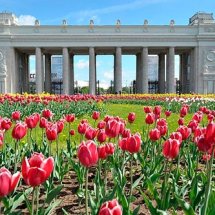 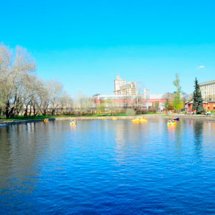 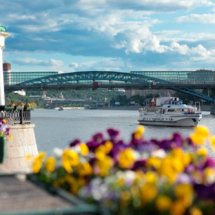 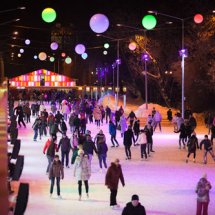 The first National Park in Russia, the largest forest in Moscow and the third largest forest situated in a city in the whole world – this is what you have the chance to see if you decide to visit Losiny Ostrov National Park. The park features three divisions: the one that is always open for the public, in which you find many recreational methods and devices; one which is destined for training and excursions and that has certain visiting rules; and the largest one, which is protected and not opened for the public. A tour of the park gives you the chance to observe the unique characteristics of the natural Russian habitat, including grasslands, coniferous and broad-leaved forests, and more than 200 animal species. 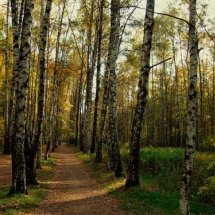 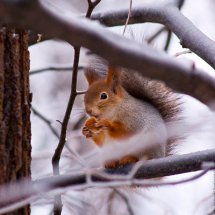 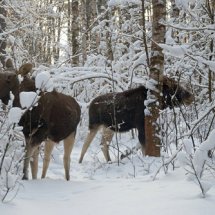 Poklonnaya Gora, or the Bow Down Hill, is situated on the western Moscow outskirts and is considered by many as the perfect natural site where you can reflect over Russia’s glorious and fascinating history.

Poklonnaya Hill includes the Victory Park – a museum in the open-air dedicated to the two wars – the Patriotic War of 1812 (with French) and the Great Patriotic War of 1941 – 1945 (with Nazi Germany). It includes a wide array of splendid monuments, columns and statues. All these are perfectly integrated in the natural environment, giving you the opportunity to learn and relax at the same time.

While enjoying a stroll in the Victory Park Moscow, come along to the Museum of the Great Patriotic War (World War II). It is a spacious semi-circle structure with a dome and Russia’s biggest museum devoted to those dramatic events in the country’s and world history. 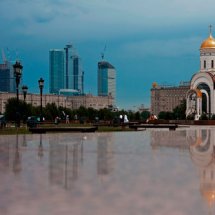 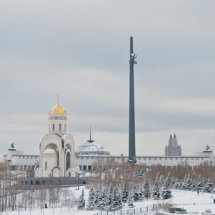 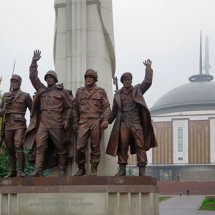 Formerly known as Lenin Hills, Sparrow Hills is situated on the right bank of the Moskva River. Being one of the highest natural points in Moscow, it is the best place to observe the whole city:

The University and the Trinity Church are just two of the cultural attractions included in this area. Sparrow Hills Moscow represents a great opportunity to take a break from the agitated city life and enjoy some peaceful moments off the busy downtown.

It is so during the day, as in late hours – almost every night during warm season and on an occasion in winter – Sparrow Hills totally change their look. This place becomes lively and crowded with… Moscow bikers. It is their favorite spot to meet and hang around – it seems they are all there. If you are after some cultural experience of that kind, you will get it there, around or after 9 pm. 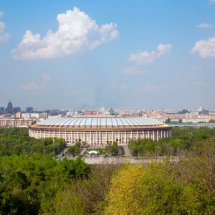 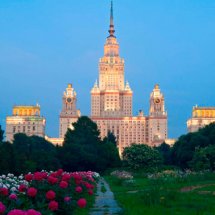 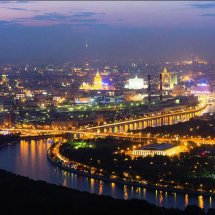 If you would like to visit one or several sights described above, your Moscow Tourist guide will help you with that. Kremlin Tour guides can design your own itinerary and include a visit to one or a number of these Moscow parks and gardens.