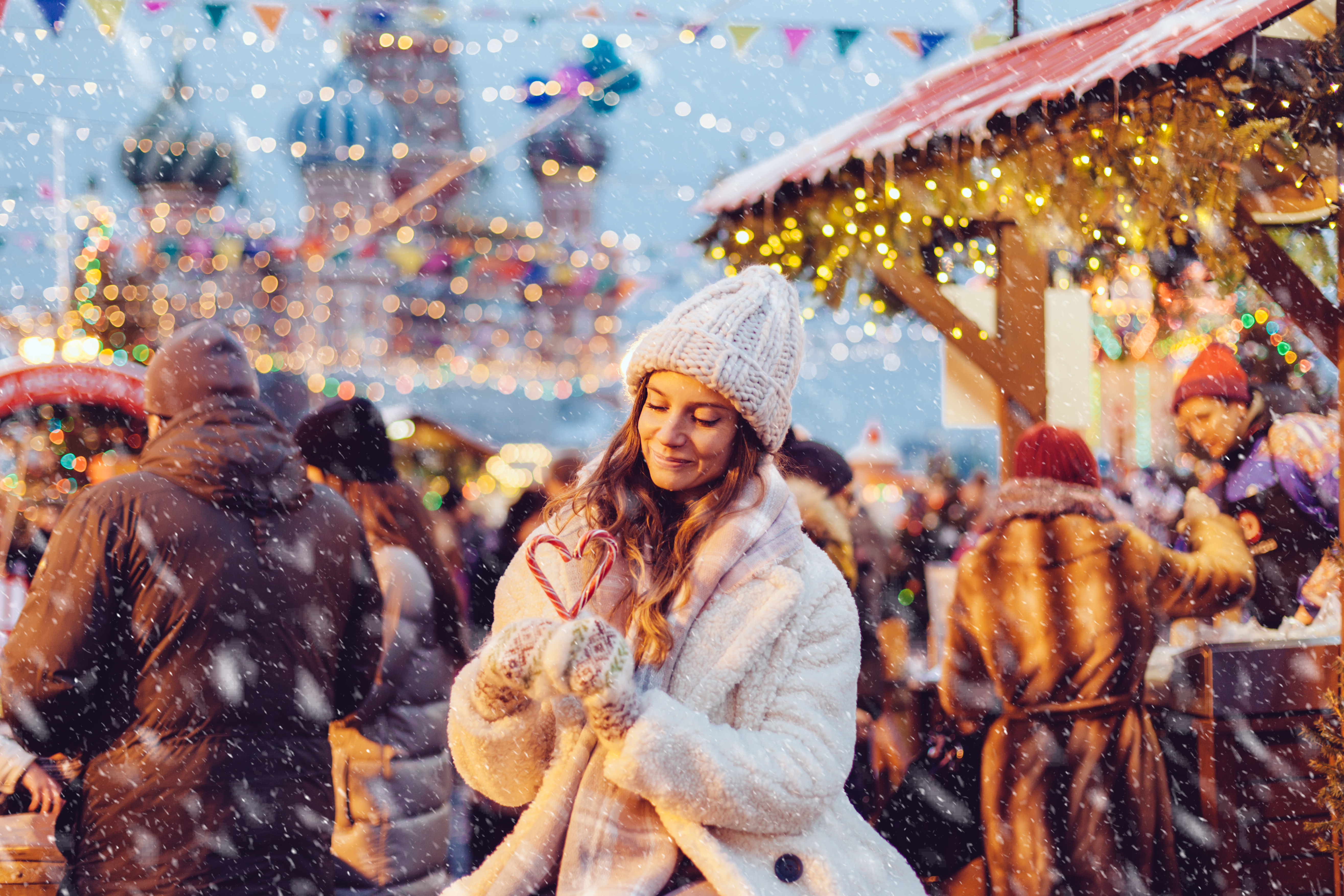 Russia is famous for its cheerful holidays and wide celebrations with colorful traditions and customs built up over centuries. Friendly and hospitable Russians enjoy spending their off-time in the company of families or friends. If you are ever invited to world’s biggest country during a holiday season, be prepared for a generous feast and lots of fun.

During the time of celebration work is put aside. According to the law if a holiday takes place on weekend, it extends to the nearest working day. For example, if a holiday falls on Sunday Russians get an extra day off on Monday, if on Saturday – on Friday.

Each season in Russia is rich in its own peculiar and authentic holidays, celebrated with lots of delicious food and entertaining challenges. On your Moscow tours English we will be happy to introduce you the local culture and celebrating traditions.

Pick the season of your Russia visit below and find out its special dates! New Year is one of the biggest and brightest events in Russia. Its preparation usually starts early in December when snowy streets and shop windows start dressing up with colorful decorations of lights, tinsels and ornaments. New Year’s / Christmas season begins here on December 31 and lasts till January 9 or 10. So Russians have ten whole days to rest and celebrate. 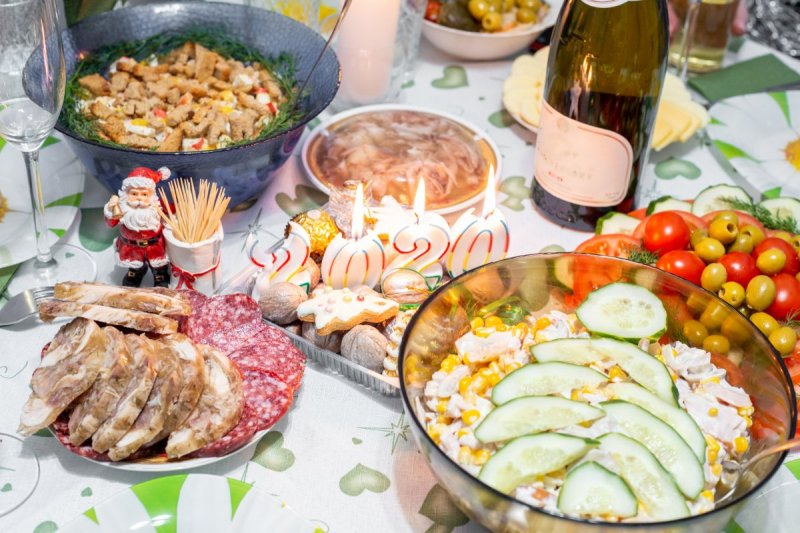 On the 31st of December people hurry home to start cooking and primping along with last minute shopping for the evening. When time draws closer to night everyone gathers at a big table laid with traditional holiday meals to send off the old year. Spectacular Russian feast is usually presented by typical New Year’s food which is:

At midnight after the President’s speech, everyone raises their glasses filled with champagne and toasts for a better year. People make their wishes for something great in the next year and drink their beverages bottoms up.

If you decide to meet New Year outdoors in Moscow, do not forget to visit Red Square, city centre or famous Moscow parks, such as Gorky Park or Sokolniki, at midnight. When you hear the chimes of the Kremlin Clock start to strike twelve times, counting last seconds of a leaving year, raise your head above to admire magnificent show of fireworks.

Is it a national holiday?

– Yes, it usually lasts till 8 or 9 January to include Orthodox Christmas. 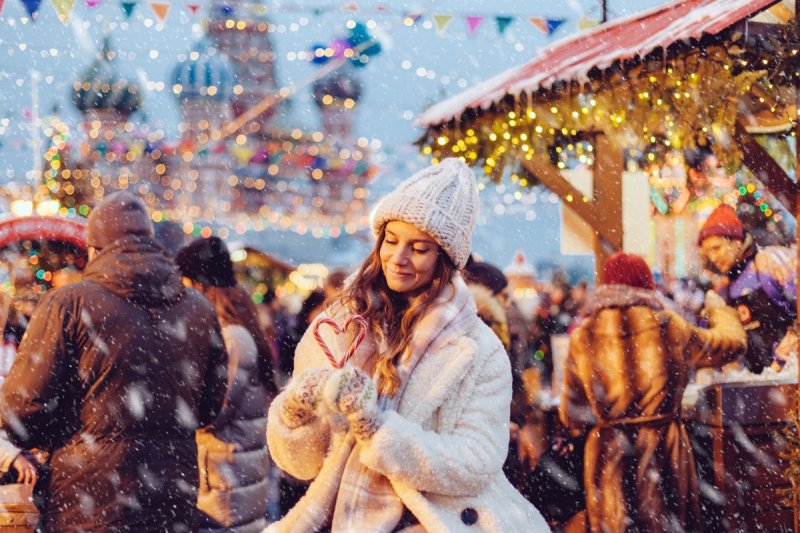 Christmas is another big holiday during winter season. Though it’s not as wildly celebrated here as abroad, Russians still love this holiday and honour its traditions.

At Christmas Eve (January 6) people make their way to churches to worship the birth of Jesus Christ and whisper silent prayers for the sake of their dearest. Those who aren’t able to be there in person usually watch ‘live’ translation of a holy mass on television.

Fortune-telling is another old tradition enjoyed greatly by Russians on the Eve of Christmas. Late at night all single girls gather around to foretell how their future husbands will be. Guided by darkness of the night they pour melted candle wax into a bowl of water and read coffee cups to see silhouettes of their future sweet hearts.

On January 7, close to evening a big Christmas feast lastly begins with an oven-roasted duck or a goose as a centerpiece of the table. People eat, toast and joke, rejoicing in the birth of Our Savior – Jesus Christ. 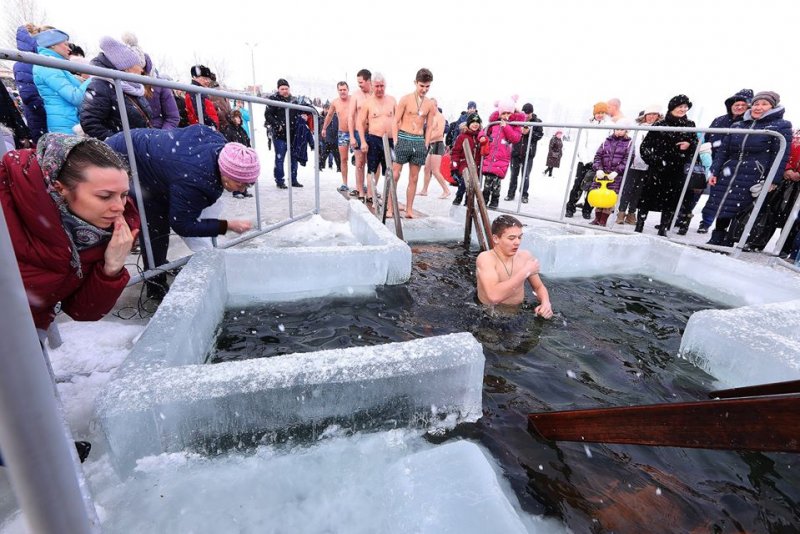 The baptism of Jesus Christ is one of the most revered holidays in Russia which roots run back to the IV century. On this day brave Russians go to the country to bathe in ice cold water exposed by a crack in a frozen lake or a pond. Gathered on the bank of the snowy river, people watch the priest who ducks his big cross into the water to bless it. The tradition says if one bathes into blessed, freezing water his soul will be cleansed from evil spirits.

This miraculous ability of water travels back to the day when John the Baptist christened Christ on the bank of the river Jordan. Following this tradition every year Russians visit frozen lakes, ponds or rivers to bathe in cleansing water as Jesus Christ did. Though many people celebrate this day, it is not a national holiday in our country and people still go to work.

Afterwards, frozen but energized people drink hot hearty tea with sweet treats and fill their bottles (brought with them) with holy water to carry home. 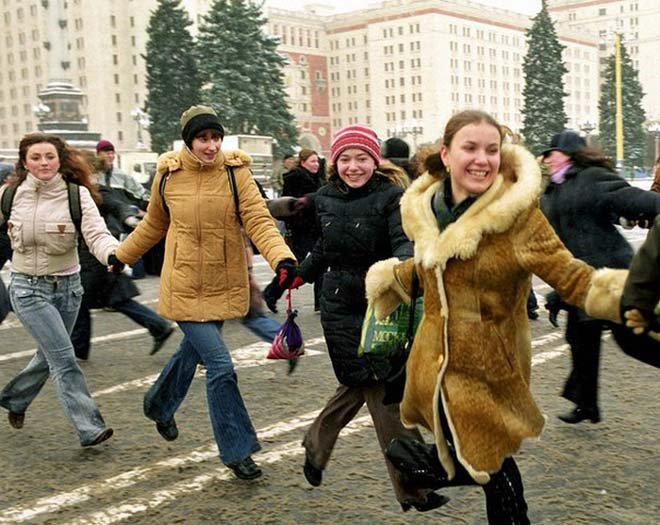 Students’ Day or Tatyana’s Day is traditionally celebrated on January 25.

This is time of fun and crazy parties for all students in Russia. Traditionally this holiday was named after the patroness of students – Tatyana, a well-known martyr, tortured for her religious beliefs in III century. Years ago, on the day of her death, the empress Elizabeth signed a decree to open Moscow University which is now proudly the most famous university in the country. Some time after, this day became a holiday in Russia celebrated among all students. During celebration young people have fun and hope to call good luck at midterm exams by screaming ‘Good luck! Come!’ in the open window.

It is not a national holiday in Russia and students, as well as other people, wake up in the morning to go to work or study. 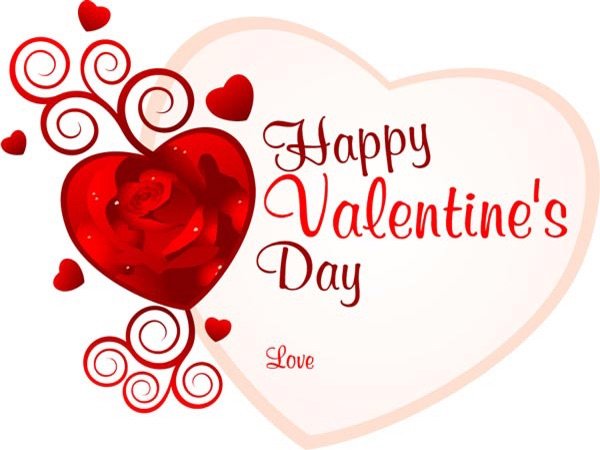 Delivered by western culture, St. Valentine’s Day quickly became very dear to everyone in Russia who is in love. A day of chocolate, flowers and romantics cards can be easily called one of the most enjoyable times during cold months of winter. Married people celebrate their love at the restaurants with delicious supper, gentle light of candles and fine wine. Young couples prepare romantic surprises at home and display their feelings with gifts and passionate kisses.

Russians usually celebrate this holiday in the evening after work as this is not an officially day off.

Where to enjoy your perfect Valentine's Day in Moscow? Our post will help you:Top Romantic Places in Moscow

Defender of the Fatherland Day | February 23 The 23rd of February is a very special day for all Russian men who serve or work in the army and defend our land during war conflicts or guard our peace. On this day wifes and daughters treat their men with a hearty meal and give them nice presents. Girls at school prepare small performances for future defenders (boys), where they sing military songs, dance or read poems.

During this time men relax at home, enjoy loving atmosphere of their families and watch military films on television for this is an official day off for entire Russia. Those who wish to spend this day outside, go to the central square to take pleasure in performances prepared for them by local musicians and artists.

Maslenitsa is one of the oldest holidays in Russia. It begins a week before the Lent (which has varying dates each year) and lasts for a week from Monday till Sunday. During the whole week of Maslenitsa people make tasty pancakes after spare from work time and say good bye to winter.

In times of Old Rus’ each day of Maslenitsa was dedicated to its own theme and had its own customs. For example, Monday was a meeting day when daughters-in-law visited their parents and spent some quality time with them. Tuesday was a matchmaking day for all single girls who were seeking for a husband. Wednesday traditionally had a name ‘sweet tooth’ during which sons-in-law visited their mothers-in-law to taste hot pancakes and delicious pastry. A merry-making Thursday was time of fun and outdoor games. On Friday mothers paid visits to their married daughters. Saturday was called ‘sisters-in-law gatherings’ when single sisters spent good time with each other, while gossiping and drinking tea. The merriest day of Maslenitsa week was ‘a send-off’ Sunday.

Traditions and customs of this day are still alive in modern Russia. Its celebration begins early in the morning on central squares of cities and towns. At holiday bazaar everyone can taste hot pancakes with sour cream or red caviar, buy freshly baked pastry and sip strong medovukha – a customary Maslenitsa beverage made of vodka and honey. Dressed with colourful shawls and traditional costumes women offer steamy hot tea from samovars and shout cheerful chastoochkas. A bear who wears a hat and dances funny at the sounds of an accordion – is the main attribute of Sunday Maslenitsa.

At the end of the day everyone gathers around a big scarecrow, representing winter, and sets it on fire accompanied by cheers and cries.

If vising Moscow in winter, discover its exciting celebrating traditions with us on our Moscow tours English! Celebrate Russian Maslenitsa, Christmas and New Year as a local!